Lizzie came down today wearing the prettiest dress. Her grandmother bought it for her at Bloomingdales in New York a few years ago but Lizzie couldn’t wear it because it was too big, until now.

END_OF_DOCUMENT_TOKEN_TO_BE_REPLACED

Darn, I had to take Michael to the Apple Store today, and the closest one is at the mall where Nordstrom Liz works. It was a bummer, but I tried to deal with it gracefully. After Michael took his broken ipod (the jack was broken, and even though he had dropped it and the screen was cracked, and it was eight months old, they gave him a brand new one), I went and met with Liz.
END_OF_DOCUMENT_TOKEN_TO_BE_REPLACED

Two days ago Mean Pinterest Girl got me down (but only for a little while, and then your outpouring of love and encouragement here and on Facebook boosted me up again), and then day before yesterday my toenail fell off, making it a little awkward to show my feet — and just when sandal weather has finally arrived! Oh well, not a big deal, except I have to wear comfy shoes for awhile, like these: 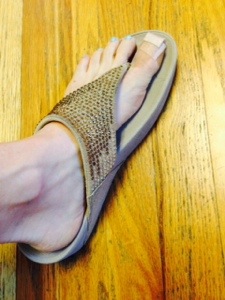 END_OF_DOCUMENT_TOKEN_TO_BE_REPLACED

WELL! I knew this would happen at some point if I kept posting pictures of myself, but I still got my feelings hurt: someone on Pinterest repinned a picture of one of my outfits on a board titled, “Bad Fashion.” I was hoping the term “bad,” meant as in, “yeah, you rock that outfit, bitch,” but no. It actually meant bad.
END_OF_DOCUMENT_TOKEN_TO_BE_REPLACED

It seems this year the big rage (in the magazines, anyway, I don’t know about real people) is mixing patterns. I’ve seen black and white striped skirts with shirts that have giant red polka dots, plaid mixed with leopard, two different flower prints, multiple geometric prints, you name it.

END_OF_DOCUMENT_TOKEN_TO_BE_REPLACED

I heard recently that women take care with their appearance for other women more than anything else. Does that mean because they want to impress other women? Or they don’t want other women to look down on them? Or is it a sisterhood kind of thing, as in, let’s-show-the-world-how-nice-we-can-look?

END_OF_DOCUMENT_TOKEN_TO_BE_REPLACED

Happy Saturday, friends. At last it’s warm enough (sort of) for my new Free People lace shorts. I love them! I added a belt and some gladiator sandals ($29.99 from Target). With the sandals and the scalloped bottom of the shorts, don’t I look like an actual gladiator? I should have grabbed one of the kids’ swords.