This morning went all to hell: After I got the kids to school, I planned to run with the dogs, then return a book of swatches to the interior design place, then work & shower, then go to a meeting, then work some more. Instead, as Michael was running out the door to school, he suddenly stopped and said, “I think I’m gonna throw up.”

Then he ran to the bathroom and did just that. SO, I spent some time making sure he was okay, helping him clean up, settling him on the couch. Oops, too late to run with dogs, because I have to return the swatches at 10. Returned the swatches, came home planning to work out upstairs on cardio machine and with weights. Michael needed toast. Michael needed more ginger ale. And snuggling (which nearly made it all worth it). Oops again, because it’s too late to work out. Sat at my desk to do some work. Got dressed (Free People shirt with black lace peplum, Hudson jeans – see below – funky Madden Girl black heels with a big black felt flower on the toe), and go to my meeting.

Stopped on the way home to pick up something that would help Michael feel better. Get him some food. More ginger ale. Find the Tums. Sit down to work. The phone rings, it’s Lizzie: Can you come get me? The bus never came. Oh, and you need to bring home Gilliane, Chloe and Fiona, too. Run to the school, grab the girls, drop them off one by one. Back to my desk to work! Hooray! Getting lots of stuff done.

Finally finished with work for now; it’s 4:09. I really should work out. I started the day in my workout clothes. But now I look nice! I don’t want to change. And get sweaty. And then shower again. Sigh. Not sure yet what I’ll decided…

I’ve been asked a couple of times whether my fashion obsession has gotten in the way of anything. So, yes, it sometimes makes me not want to work out. And a couple of times I’ve been late for meetings because I was trying on different outfits and lost track of time. Sue me. 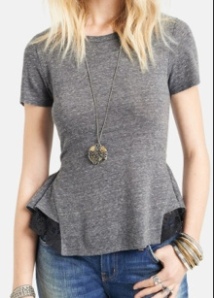 I wore the outfit with the black leather jacket I wrote about a day or two ago.