Yesterday I had a plan: I would wear my new turquoise Converse kicks with cropped jeans and a favorite Free People oversized shirt — it’s a sort of pink-y blue corduroy, with a soft flounciness that I love. Hadn’t worn it in awhile. And I’ve shared my thoughts about weight gain right? (No, haven’t lost it yet.) So I put on my sneaks and jeans (not in that order) and a soft T-shirt and then I went to put on the Free People shirt and… I. Couldn’t. Get. It. On.

No, it wasn’t too small in the bust, which I would have been sort of okay with, since I’ve always gained weight there. It was too tight in the f***ing arms. The arms! Now, I’m trying not to judge myself, but that was just the last straw. The blouse always had sort of tight arms anyway, which a year or so ago I thought was great because I imagined it showed off my triceps. But do you know how frustrating it is to shrug an oversized shirt up over your shoulders and not be able to put it on? Pretty damn frustrating.

Then I sort of went into a blackout, I think, like one of the Merry Murderesses from “Chicago:”

“Well, I was in such a state of shock, it wasn’t until I was washing the blood off my hands that I even knew they were dead.”

I mean, no, I didn’t kill anyone. But the next thing I knew, I had the scissors and I was cutting off the arms of the shirt. Yep, I cut them right off. Now it’s a vest. And I wore it. With the orangey pink T-shirt and the cropped jeans and the Converse. Cute? Awful? I really don’t know.

When I picked Lizzie up at school, she stopped with her hand on the door handle and stared at me through the open window (on the bright side, the weather here has been gorgeous) and asked through clenched teeth, “What did you do to my shirt?” Bear in mind it is not her shirt. In fact, when I bought it, she made fun of it. But then she began borrowing it, and then it became “our” shirt, and then, apparently, her shirt.

When I told her the situation, she sighed and said, “You need to find better ways to express your anger.”

Personally, I thought it looked cute as a vest. Lizzie did not. Neither did Paul, but when I said I didn’t want to tell him why I did it, he said, kindly, “You probably just got frustrated with it for some reason.” I love that man.

When I lose weight, maybe I’ll be pissed at myself for my tantrum, but whatever. Sometimes you have to act on a whim, and I wanted to wear the damn shirt. I’ll have to take a picture and see what y’all think. 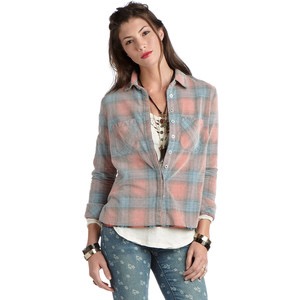 This is the shirt. Oh my God, it’s so cute. Why did I cut the sleeves off?

In happier news: yesterday I discovered the secret of eternal youth. Two years ago, my friend/stylist from Nordstrom’s strongly suggested I buy the Clarins Clarisonic Mia Skin Cleansing System. It’s an electronic face scrub dealio with a rotating brush that you swirl over your face for 60 seconds. They say it cleans your face six times better than regular washing. I always thought, “How much difference can better cleansing really make? If it told me it would reduce wrinkles by that much, I’m sold.” But I finally decided to try it.

There are a whole bunch of them (increasingly expensive) but I bought the Mia 1 and I swear, people, after a single use I noticed a huge difference. My skin feels clear and soft. No bumps, no rough patches. After two uses, I feel like I look ten years younger. Actually, I feel like now I look my age rather than ten years older.

Bear in mind that I’m not wearing makeup and haven’t showered since my workout class when I jumped like a kangaroo for 30 minutes, but don’t I look fresh-faced?

Now, I know it’s probably my imagination. But my skin does feel softer. Maybe visually it doesn’t make much of a difference yet, but I’ll let you know if I get any comments.

In other notes: I have changed gyms in the hopes of a renewal of motivation to get back in shape. I’ve joined a new high intensity training class called GRIT (I’m sorry Jen, I really will miss you and look forward to the next Fuzzy’s outing). I’ve only been once. It’s half an hour of intense jumping and leaping and lungeing (sp?) and lifting and jumping some more. The instructor can jump, like, six feet straight in the air. She has more energy than I had when I was two and she jumps like she has springs in her shoes. I think I was clearing the ground by about three inches, and she must have been four feet in the air. And get this: I also got up at 5:00 am on Tuesday to do a Body Pump class at 5:30 and be home by the time the kids were getting ready for school.

Also, I have been thinking of the difference between style and fashion again, and the difference between style and class. I don’t feel like I’ve mastered the art of classy dressing. I mean, really, a corduroy shirt with cut-off sleeves? I’m not really sure what I want to look like. I keep thinking I want to look ultra classy like my mother-in-law, with tailored pants and crisply ironed white cotton blouses and little leapard patterned flats and classic necklaces and understated earrings. Or like my own mom, classy but a little more funky and modern. But I don’t know how to attain that. Literally. If I had crisp white cotton blouses, I would never iron them. If I had tailored black pants, they would eternally be covered in lint. If I wore thin, classic gold chains, I would break them in no time. So does that mean I can’t be classy? What is classy dressing? Is it different from classic dressing?

Finally, I’ve been having a blast with makeup. I love Urban Decay eye shadow. I bought this gigantic smokey eye pallet and it’s super fun to experiment with.

Someone once told me that with my coloring, I shouldn’t try smokey eyes. What the hell? I want smokey eyes, dammit. Also, I set up a makeup table in my room. I highly recommend it if you want to play with makeup. Here’s what I suggest you have: a little stool so you’re comfortable while you mess around; Q-tips and cotton balls; make-up remover for when you screw up; a variety of eyeshadows and a variety of brushes (I always wondered why you’d need a bunch of brushes, but it’s amazing what you can do with the different sizes… blending is easy and you can target different areas of your eyes or cheeks or lips); a lighted makeup mirror which is a huge help because when I was doing makeup in my bathroom I realized that one side of my face was better lighted than the other and so my eye shadow was always darker on that side; and pretty dishes or pretty little boxes or a nice tray or other pretty accessories to put your equipment in and to make yourself feel pampered and, well, pretty.

I recently (ha! recently! meaning about four months ago) wrote some makeup tips for the middleaged woman, which, by the way, I have been totally disregarding, but if you haven’t seen them, they’re worth a look.

OK, over and out. More soon (or four months from now).