Question for my middleaged women (MAW) friends: Did cavemen go out into the fields and lift boulders over their heads simply to improve strength and impress cavewomen? I’m about 95% sure not. I’m pretty sure they got enough exercise hunting mammoth,  being nomads, foraging for roots and nuts and such. In the winter, when they weren’t hunting and foraging, they probably sat around the fire on their mammoth-fur rugs and told stories and chewed on mammoth jerky. They got “exercise” by being active in the course of their regular lives. Sometimes that sounds delightful to me: spend all day in the fresh air, live a simple life (not easy, but simple), engage in a “job” that is related to actually living. It also sounds lovely to relax by a fire all winter, telling stories. Of course, they probably froze their asses off, they had no books, and I bet their stories consisted of:

“Me kill mammoth. Mammoth go ‘aaargh…,'” answered by, “Me eat mammoth. Me go mmmm…” Then they’d probably all collapse in giggles because they had just made up the word “mammoth” on the spot and it sounded funny. So, not much intellectual stimulation.

Have you noticed that this is the second blog post lately where I’ve fantasized about living in a cave? Should I be worried about this? But I do have a point here:

Lizzie (15) took a summer school PE class last summer because she refused to get sweaty during school. She was required to be active for two hours a day and submit a record of her exercise. She still loves playgrounds, so I figured a couple hours at the park with friends would be fun, plus the park is a mile from our house, so she could get some walking in, too. And she loves to swim and goofs off in the pool with friends for hours.

But Lizzie wasn’t allowed to say that at the pool, she held chickenfight competitions and played keep-away for 4 hours. To her teacher, those active hours didn’t count as exercise. Instead, Liz was supposed to write something like, “Swam 10 laps freestyle, 10 laps butterfly,” etc, and record whether it was cardio, weight training, warm-up or cool down. Going for a walk wasn’t sufficient, either. She had to record how many miles, how long it took and what level of cardio it was. I was insanely pissed off, because:

Don’t you think that being the type of child who plays hide-and-seek and Capture the Flag with friends, rides their bikes, swims, and lives is active by having fun is healthier than the child who counts laps, records cardio and goes to the gym for the purpose of “exercise?” Isn’t exercise as a lifestyle better than exercise as something you have to white-knuckle your way through?

Of course, Lizzie hates to sweat; she actually hates to move and is usually to be found curled in her bed with laptop, dog, book, phone (obviously) and homework. I don’t deny that she definitely needs more fresh air and exercise. But last summer, she was willing and even eager to do that for her class, but her stupid idiotic PE teacher made her count laps, miles and heart rate, further enforcing Liz’s notion that she hates “exercise.” Isn’t that the exact opposite of what a PE class should be?
I have a friend who lived in Colorado in the boondocks. She had five kids and two dogs and two horses and five acres. Every day she scooped out the horse paddock, carried buckets of hay, moved the sprinkler to various fields, and climbed trees with the kids, carrying them half a mile home when they fell out of the tree and broke their ankles (I don’t know if that last part actually happened, but I bet it did). Did she “exercise?” No. Was she in great shape and healthy? Hell, yes.

When I left Manhattan for Colorado, I dreamed I would someday live in a cottage in the mountains, grow my own food (though I hate to garden), hunt for meat with Paul (but I’d hate to kill Bambi), get up at the crack of dawn to bake bread (I am not a morning person), chop my own wood (I think I would like that, actually) and talk by firelight while knitting socks for my 14 babies. Going to the gym did not appear in these fantasies. Being fit and tan and muscular did. Must be my love of the book “Heidi” as a kid. Heidi helped Grandfather make their own cheese, wandered the mountains with Peter the Goatherd, and traveled to the nearest village in the winter by shooting down the mountain on a tobaggan (ah ha! thus my love of snowboarding!). And when they forced her to move to town, she sleepwalked at night because she was trying to get back to the mountains. (By the way, they allowed her to go back to Grandfather because she was so unhappy and I’m pretty sure they lived happily ever after.)

So call me Heidi from now on. This also solves my problem of trying to figure out my  fashion style: I will wear full skirts of blue, with red bodices that lace up the front. And sturdy boots. And puffed sleeves. And braid my hair, of course.

But back to exercise: Mikey and I have started playing racquetball. We both kind of suck and it is hilarious to watch each other make ballet-like (if it was a really awkward ballet with people who have never danced before and are wearing sneakers)  leaps through the air, swinging and missing the ball by a good three feet. We love to watch the ball sail by, bounce off the back wall, and hit one of us in the head because we lost track of it. Also great fun is watching each other crash into the walls, lose our balance, and fall on our asses.

Because of the ridiculousness of our games, I was convinced Lizzie would love it. I forced her to come with us, promising she would laugh until she cried. Well, I was right about the crying part: as soon as the first ball was hit (nowhere near her, by the way), she screamed, wrapped her arms around her head, and dropped to the floor (I AM NOT EXAGGERATING). Michael and I hit the ball as gently as possible, but no matter the speed, and no matter how far from her it was, she continued to fear for her life. She didn’t actually cry, but she was close. She did, however, get a bit of exercise running away from the ball. Also, does it count as a cardio workout if you heart is beating hard from fear? So much for that great idea.

Lizzie, after our first (and last) “game.”

After Liz left to sit outside the court and text her friends about the terrible thing her mother made her do, Michael and I had a fierce game. 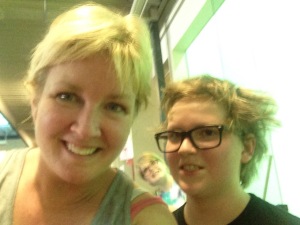 Nice hair, right? And Lizzie’s anger did not stop her from happily photo-bombing us.

My final point (thank God): If we incorporate an active lifestyle that we enjoy, or that is part of just living, do we need body pump classes or spinning? Again, I take classes at the gym twice a week or more and I’m not dissing on gyms or people who use them. I guess I’m just dissing on the necessity of gyms in today’s world.

Take care til next time, friends.

4 thoughts on “Cavemen, Lizzie’s Fear for Her Life, and Rants about Gyms”