Finally got to shop with Nordstrom Liz again — she moved to a more distant Nordstrom a year or so ago and I hadn’t gone to see her since the move. Friday night I took Lizzie and a bunch of her friends. We had dinner with Nordstrom Liz and then tried on a bunch of clothes in the fancy, large dressing rooms that Liz had put together for us. I could hear the girls giggling and trying on clothes and hats and boots, while I shopped and got some fashion advice from Liz. For example:

-I had made an ill-advised purchase of a Free People sweater back in August, that I love in theory but that isn’t the most flattering item of clothing ever. I showed Liz a picture and asked her advice of how to better wear the sweater. When she saw my picture, she agreed: “Yeah, that’s a lot of sweater.”

So, this (above) is the picture I showed Liz with the extra-sweatery sweater. I look, um, broad. Liz suggested adding some color and wearing a wider belt over (not under) the sweater. Today, I tried this: 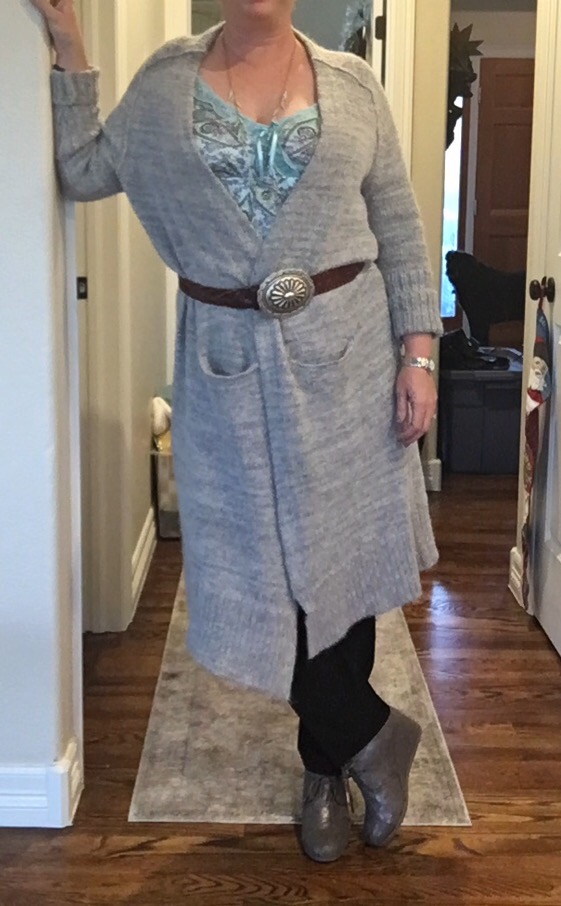 I cut my head off the picture because I wasn’t wearing lipstick and I didn’t get a lot of sleep and I looked strange and to be honest, I’m getting tired of looking at my own selfies (as, perhaps, you are, as well, but whatever). Maybe it’s not my head that made me look odd, though. Maybe it’s just the outfit. So, I wore a more colorful tank top under the sweater. I wore a new pair of black, straight-leg pants with a sort of satin-y stripe down the side. And I added a pair of gunmetal gray/silver booties that I bought Friday night with Liz. I had asked Liz for a pair of grey, wedge-heel booties, and she returned with these shiny ones, and I love them. 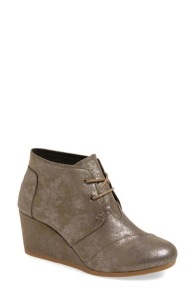 But back to the sweater: wider belt buckled over the sweater, brighter color tank top, slim pants… and, as Paul put it (and I’m pretty sure I agree), I look like I’m ready for my role as a shepherd in the Christmas pageant. Is it hopeless? Maybe it’s just the kind of sweater that you wear to be cozy, on a crappy day, than one you feel classy in. I wore the outfit to church today, so maybe the shepherd look was appropriate. And at least I was warm.
Okay, other tips from Liz:

1. Untucked shirts are OK. You don’t always have to do the half-tuck. Example: here’s what I wore Friday night for shopping. 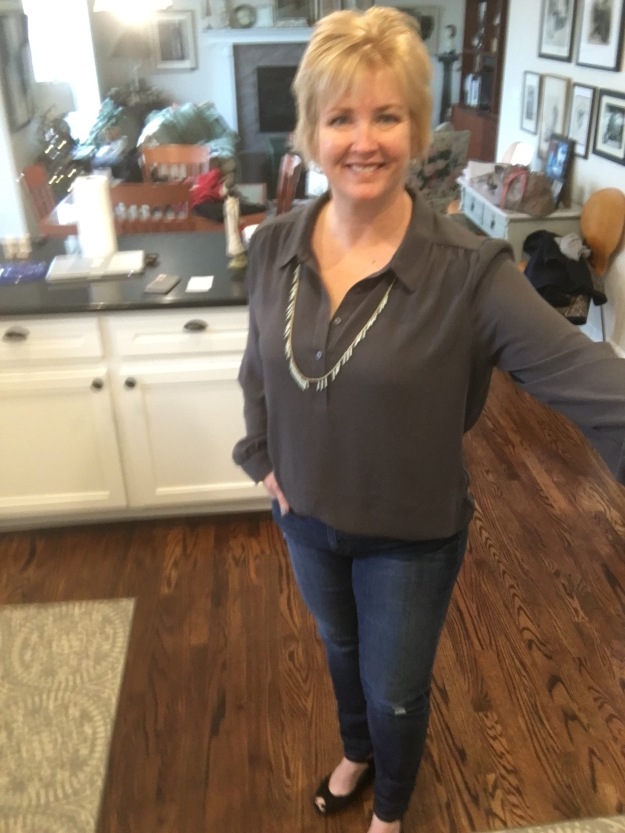 Blouse is 14th & Union, jean’s are Joe’s, both from Nordstrom Rack

So, Liz says the shirt, with the half-tuck, is nice sometimes. But having it hang straight and blouse-y can make the lines look longer and make you look more streamlined. I worried that with it untucked, I had no waist, but she disagreed.

Side note: the camera on my new phone IS better than the old phone. But it is hard to hold the selfie stick still and push the button to take the picture without wiggling. So all my pictures are coming out blurry.

Second side note: I seem to be annoying myself. I think I should go to bed. But don’t they tell you that you should write even when you don’t feel like writing?

Third side note: who are they, anyway?

3. What else did Liz tell me? Stockings are still okay, despite the fact that the fashion magazines will tell you you’re a horrible person if you wear them. Choose sheer stockings just a shade or two darker than your skin.

4. To elongate your trunk/midsection when wearing a button-down shirt, wear a tank top and leave three buttons open. 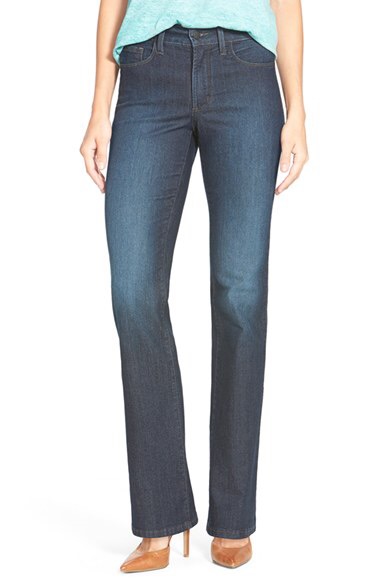 I also purchased this Nic & Zoe sweater, below. I swear it’s cute, but looks awkward in this picture. Or maybe it looks awkward on me and I couldn’t tell, because I am BEGINNING TO HAVE THE SENSE THAT I HAVE NO IDEA WHAT THE HELL LOOKS GOOD OR BAD OR ANYTHING. I’m suddenly very discouraged. 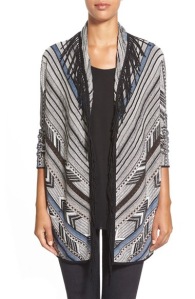 Finally, I also got the purchase that got me going on Mother-guilt. See, I had just spent more than I knew I should spent have at Nordstrom, forgetting that there was a Free People store at Cherry Creek. So of course, I had to go to Free People. And I felt sad that I spent so much money already because everything was so pretty and frilly and yummy at Free People. I justified the purchases at Nordstrom to myself because I really did have a need for everything I purchased, since much of my winter stuff doesn’t fit right now. But I wasn’t going to buy anything at Free People, because it was all frivolous. And I was DONE shopping. For, like, months. Lizzie was getting a couple of hair things at Free People, though, so I was standing in line with her, when I caught sight of a dark purple velour blazer with five buttons on the sleeve cuffs and a drapey lapel. I jumped out of line, tried on the jacket, glanced in the mirror, and tossed it down on the counter. The counter chick told me her mother has the jacket and that she is very stylish and I immediately envisioned myself stylishly and sort of whimsically dressed, walking down a city sidewalk at Christmastime. The thing is, I had already spent too much money. I shouldn’t have bought it, and I shouldn’t have even bought the variety of Nordstrom things I bought, and (the slightly shameful part of this whole thing): I’m not even sure I love the blazer! I just love the IDEA of a purple velour blazer.

Anyway, I have been feeling guilty about a whole shitload of stuff lately, so the shopping trip just put me over the edge and I’ll definitely write about that next time, because as soon as you all begin to comment to me and tell me how you all do and feel similar things, I won’t feel so bad…

Here’s the blazer. You’re probably wondering, because the model is blonde, but that’s not me. 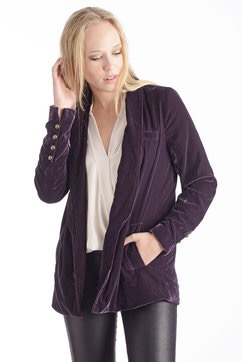 What’s the difference between velour and velvet? They call this velvet. Felt like velour to me.

I have now succeeded in annoying and depressing myself, when the whole purpose of this blog is to enjoy and celebrate. Argh! Double argh! Well, it’s Sunday night and it happens sometimes. Have a great Thanksgiving week and I’ll write more soon.