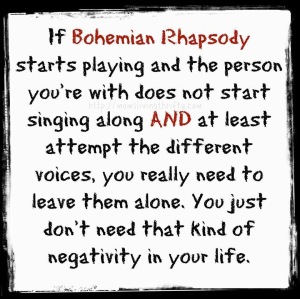 So true, so true…

Once women become middleaged, especially if they have a family, I think we often find we have lost a part of ourselves — that we’ve forgotten what we’re passionate about and don’t spend enough time nurturing ourselves. Do you agree? If so, read on.

I’ve talked about my love of singing before: how I sing along with the Muzak in the grocery store and don’t realize it (until the clerk says, “I guess you like this song”), sing Christmas Carols while I’m walking the dog (I have no idea why it’s always Christmas carols) or, like many of us, in the shower. I am blessed with a family that not only supports my singing in theory, but they never, ever ask me to shut up (though sometimes when Lizzie and I are singing together in the car, she’ll tell me not to sing so loudly because she either can’t hear the radio or herself).

I once dated someone in college who hated musical theater people because they were always singing and always seemed to expect you to comment on their talent. Sometimes I think of that when I’m singing at the top of my lungs while I make dinner, or while I’m driving with my husband in the car, and we’re not talking, and I’m singing Broadway showtunes (pretty loudly) to my heart’s delight. He doesn’t often comment about my singing, and I don’t expect him to. Sometimes he’ll come into the kitchen or wherever, after I’ve been singing, and tell me, “You sounded pretty.” And he comes to my recitals and tells me how great I was. I don’t expect him to gush. I just like to sing. And I think he likes to hear me, because it’s part of who I am.

I don’t have a professional singer’s voice, by any means. I can carry a tune, and my voice has a relatively pleasant quality, I think, but it doesn’t fill a room (or a theater!) like, say Idina Menzel or Sutton Foster or, you know, Patti Lupone. (Or Kristin or Betty or Angela; I don’t want to leave anyone out…). Or my daughter, for that matter! (God, I wish you could all hear Lizzie sing!) So, yeah, I never did make it to Broadway and, barring some miracle**, I never will. But I love it, and it brings joy to my life, and I’ve been taking lessons with an AMAZING woman for about 10 years and she has brought out the best in my voice, as well as sharing my love of Broadway and of daughters and friendship and I just can’t say enough about how wonderful it is to have her in my life. 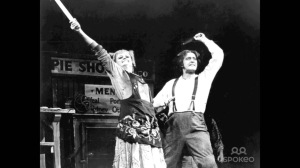 I’m getting off point, though: I don’t “do” anything with my singing. I just LOVE it. And by that I mean that I actively love it: I make a point to love the singing in my life, to do as much of it as I can, like singing with my kids and taking lessons and singing in the church choir and in the bathroom. It brings me joy in the way that so many things in life fail to do. 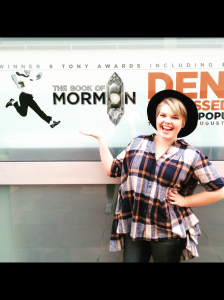 But I have to nurture it. I have to make time for it, and go out of my way to search for it sometimes. Sometimes it’s hard, or frustrating. Sometimes it’s sad, like when I have a sinus infection for FOUR MONTHS STRAIGHT and miss more singing lessons or church choir rehearsals than I make. And now I have sinus surgery scheduled for Feb. 9 and have alternating fantasies, good and bad, about it:

Good fantasy: having my sinuses opened up will create all sorts of new space in my head for resonance and my voice will soar into that of a meadowlark and I will become instantly world-reknowned for my beautiful singing. Or, barring that, I will simply sound better. Proof that this may happen: I read a Tweet from a singer who had similar surgery and she said, delightedly, “Singing is so much more fun now!”

Horrible fantasy: the surgery will totally ruin my voice and I will sound like the poor girl in Chorus Line who “could never really sing.” Proof that this may happen: I once heard that the reason Barbra Streisand has never gotten a nose job is because it may change/ruin her singing voice.

So you see, the proof is irrefutable either way and I’m not sure who to believe: an unknown Twitter person or a half-remembered rumor. Luckily I have a pre-op appointment with my ENT next week and I bet he can answer the question better. (Note to self: don’t forget to ask. Better yet, ask Paul to ask, because knowing me, I WILL forget.)

I am actively seeking ways to bring more singing into my life, though I don’t yet know what that means or how it will play out. But it’s one simple thing I can do to enjoy my middleaged years more fully.

How about you? What do you love? What are you passionate about? Are you seeking it out in your life? If not, consider finding something wonderful to do, even occasionally. Take horseback riding lessons. Watch more movies. Read (or write!) poetry. Learn to cook. Become a wine connoisseur (thank God my dictionary popped up the spelling for that word before I botched it). Try hang-gliding or parachuting (if you’re really adventurous, which I like to think I am but will never jump out of a plane). Pottery? Painting? Jujitsu? (I don’t know what that is.) Fencing! My sis-in-law picked this up in her middle years and now is like, a super fencing rock star and travels around and competes and wins — and looks really cute in her gear, to boot, NOT THAT THAT IS IMPORTANT!

And so, til next time,

I remain your singing friend, Jen

**Here’s how I see my one chance to end up on Broadway. It’s a longshot, but as the little kid says repeatedly in Angels in the Outfield (which Michael loved so much when he was about four that it was sort of a running loop in the background of our lives for awhile), “It could happen.”

Scenario: LIZZIE makes her Broadway dreams come true in the way that I never did. She becomes so famous that Broadway buffs like me know her by her first name: You know, there’s Betty (Buckley), Angela (Lansbury), and Lizzie! She gets interviewed on Seth Rudetsky’s show on the Sirius Broadway station. She mentions how her mother was one of the inspirations that gave her her love of Broadway (I would never dream of presuming that she would credit me with being her single influence, though of course I take credit in my head). Of course, she is so famous that she has her pick of projects and decides to record her own album. On one of the songs, she INVITES HER MOTHER TO DO A DUET! The album becomes famous, some B’way producer hears it, and invites me to play a part in a new musical smash hit. Fame and fortune follow. (*Mic drop.*)

Barring that, perhaps I will at some point get to play Mrs. Hannigan in community theater, or the madame in Best Little Whorehouse in Texas.

Either of these scenarios would make me joyously happy, Broadway or community theater. I’m not really picky.

PS: Just so you know, I never actually tried to make it on Broadway. After majoring in acting in college in NYC, I decided I didn’t want to work that hard. (Sixth-floor walkups? Two or three jobs? “Standing in line with 200 girls who are younger and thinner than me” -Broadway reference, anyone?) And so I dragged Paul to Colorado to bake bread and become a ski bum. Like I said, not really picky. And when I learned to snowboard in my twenties, I realized another passion to bring into my life… But that’s for another time.

1 thought on “Middleaged Friends: Bring a Little More Singing (or Whatever) Into Your Life”