As middleaged women, we tend to have too much to do and to think about and to accomplish and to answer, and not enough time to meditate and sing and space out. I solve this problem, sometimes, by going for aimless drives in the foothills behind our town, giving myself space in my head to dream of everything or nothing. When the kids were little, I’d bring them on long rides with me, usually around sunset. We’d listen to music and they’d conk out. Then, if Paul and I were very careful and very lucky, we could transfer the kids to their beds without waking them and have an entire evening of grown-up time together.

It was great – it got so the kids would beg for long drives in the evening. So imagine my irritability when they got older and refused to nod off in the car. I’d drive and drive, and they’d stare sleepily out the window, singing to themselves, never quite slipping into sleep. Finally I’d give up. At home, they’d stumble up the stairs and I’d cross my fingers for a peaceful transition to sleep — and of course they’d come fiercely to life, demanding extra stories, an apple, more room on the bed. I’d settle them down and we’d snuggle and read and eat apples together. I had to bite giant chunks out of Lizzie’s apple and then hand them to her piece by piece because she had so many loose teeth – she could only nibble the apple (**) with her molars.

Oh my God. Ouch. My heart! This pain was not part of my planned blog post for tonight. My sweet babies! I spent all that time trying to get them to fall asleep in the car so I didn’t have to do the story/apple/snuggle routine every night. That exhausting, frustrating, blissful, delightful, irretrievable routine. I ache. Those warm pink cheeks…the footie pajamas…their sticky little arms (and pillows) as the apple juice dripped everywhere…their squirmy bodies getting heavier on either side of me until I jolted awake, realizing it was almost midnight and we’d all been sleeping together in a cocoon of pillows and blankets and warm bodies and books and apple cores…

But what am I doing? This is no time for aching and being maudlin and talking tritely about footie jammies. I should be gathering our survival gear and filling Paul in on the apocalyptic event that I’m 36% certain is about to take place.

And guess what, folks? It’s not zombies. Not a new Ice Age. Not a meteor strike. Nope. It’s deer. And maybe elk. And possibly a moose.

Remember the beginning of this post, before I digressed into nostalgia and tears? The point was that the kids and I love driving, and we went for a long drive today to relax and sing and look at the spring snow and let my mind wander. But I couldn’t let it wander much, because of a major problem: Deer. Many, many deer.

I had to drive at a snail’s pace, but that was fine. The deer were delightful: we saw one deer looking back over her shoulder, and noticed ten more picking their way out of the woods behind her, lifting their sharp little hooves delicately above the snow. We saw four deer on the side of the road, looking as though they were waiting for a signal that would let them know it was safe to cross. We saw a group of three, bedded down in the snow in a little glade just off the road, ears up, watching us. Way off in the middle of a snowy field, a group of elk lay together, enjoying the sun (we don’t usually see elk down at this elevation – that should have tipped me off right there). There were deer hopping barbed wire fences, walking single file down the shoulder, flicking their tails. I even saw a small female moose by a little pond, head bent to drink. (Full disclosure: that may actually have been a mule. Yes, yes, I can tell the difference between a moose and a mule, but at the insanely fast speed of 20 miles an hour, and with the whole winter-camouflage thing going on, I couldn’t see very well. In fact, maybe it was a boulder. Or a moose disguised as a boulder. Or a mule disguised as a moose. It’s unclear, but believe me when I say that I saw something.) 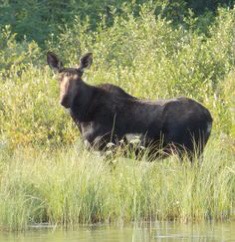 It was uncanny. Suddenly I knew we were in danger. What had seemed innocent and darling was, I now realized, flat-out horrifying:

–Deer lifting little hooves delicately above the snow? NO: deer flaunting their agility and threatening us with the sharpness of their hooves!

–Deer flicking their pretty little tails as they enjoyed the sun after a late-spring snowstorm? NO: deer using their tails as semaphore flags, telling another group to block our escape route.

–Elk hanging out in the sun in the middle of a field? NO: elk lulling us into a false sense of “what a pretty day” security while the moose-disguised-as-boulder crept up from behind.

I realized our danger, and we were able to make it out of the canyon with our lives. Driving back into town, I shuddered when I saw oblivious dog-walkers and cyclists and neighbors nonchalantly checking their mail. For God’s sake, the deer are coming, people! 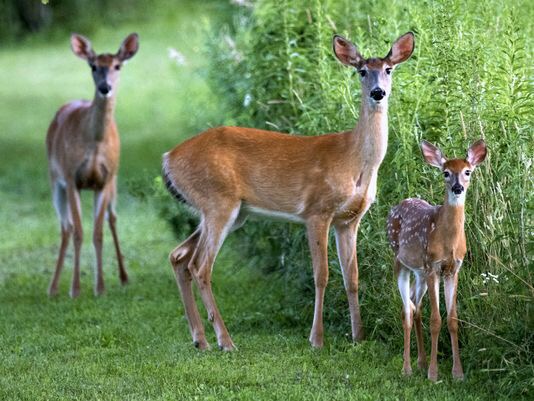 Do you remember the damage those damn seagulls did in Hitchcock’s The Birds? Think how much worse it will be when it’s not just tiny beaks and pointy little bird claws. We’re talking antlers and hooves and teeth. Also, ticks and fleas.

At least I got one last drive in with my kids before the end. Grown-up as they sometimes seem to be, they’re still willing to spend an occasional Sunday afternoon with their mom and dad. And hey, maybe we’ll all end up having to hide out in a cave somewhere. Maybe we’ll have to snuggle up, the four of us, to conserve body heat and keep each other safe. We can scrounge for nuts and, yes, apples.

So, keep your family close. Hug your babies. And bring on the deerpocalypse!

**What does it say about our world that my autocorrect changes the word “apple” to “Apple?” Seriously, are people that much more likely today to be writing about a brand than about a piece of fucking fruit? How wrong is that? Every freaking time I typed the word “apple,” I had to go back and retype it because my damn iPad thinks… Oh. I get it. Apple made the iPad. Of course the damn gadget is going to capitalize the word. It’s obviously an egotist. I suppose if I was an iPad, I’d have a superiority complex, too. But still, the word “apple,” by itself, is not a proper noun, you stupid Apple people! Sorry, ranting over. Good night.

annabankesterbeautyblogger.wordpress.com/
Fab after Fifty | Information and inspiration for women over 50 | Site-Wide Activity