I have edited and cut and rewritten and cut this stupid, stupid essay that I can’t look at it anymore. It started out with a great, fun idea (see headline and PS) but I managed to turn it into a piece with an overworked metaphor and a preachy tone that is annoying me, which means it is bound to be even worse for you. But whatever. Read it if you want. I wash my hands of the damn thing. (With all my editing and cutting, I refused to edit out the balloon metaphor, because the picture from UP is so pretty.)

As an adult in today’s world, and one who spends a fair (though not obscene) amount of time on social media, I have absorbed enough self-help phrases and 12-step slogans and feel-good mantras to last me this lifetime and at least much of my next (although maybe I’ll be evolved enough by then that I won’t need them).

Each mantra is like a brightly colored helium balloon: they’re pretty and floaty and they make me feel good while they last. But they tend to lose their air way too soon — especially if you don’t pay the extra 10 cents per balloon to have the people at Party America use something called “high fly,” which is supposed to make the balloons float for an extra day (you know, if the regular helium they use doesn’t actually WORK, shouldn’t they be using the high fly stuff automatically, in the first place?).

Back to my metaphor: each self-helpy type thing is nice while it lasts, but for me, that’s not very long. And even if each one stuck with me forever, would it really make a huge difference in my life? It’s nice to think that if I fully and successfully incorporated a bunch of self-help jargon in my life, I’d fly off to a land of peace and love and joy and unicorns. But I’m pretty sure that’s as impossible as it would be to tie enough balloons to your house that it would lift off the foundation and float you away like the old guy in UP. (Sorry, I don’t mean to burst anyone’s bubble. Just because I don’t think the house-balloon thing could really happen doesn’t mean I’m right. I was pretty sure that Ariel wouldn’t be able to get Erik to kiss her without having a voice to sing for him, and look how that turned out. Happy endings all around, right?)

What I’m trying to say is… OK, you know what? I’ve been trying not to insult anyone, but I’m talking in circles and irritating myself. My point is, sometimes enough is fucking enough. No matter how many sayings and slogans and feel-good-isms you study or post on Facebook or whatever, you’re not going to have a magical, floaty life. You’re just going to annoy people. 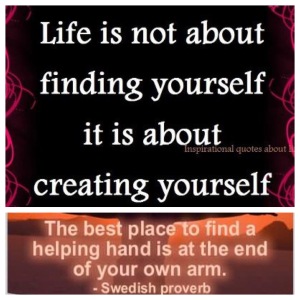 I mean, they all sound great…

Anyway, I don’t know about you, but I can’t “feel-good” my way through life. It’s fake. I feel good when I feel good. And sometimes I don’t. Besides, self improvement is exhausting. Now I’m going to shut up, have a drink, and go to bed.

PS: My point, when I began tonight, was going to be how inanimate objects can lose control and take over your life. I’m sorry I never got there, because I think it would have been more fun that what I wrote. I kind of bugged the shit out of myself. I hope I didn’t bug you while I was at it. Also, you may have noticed that I didn’t change the headline. So if you clicked on this, hoping for some advice on how to conquer out-of-control laundry, dust-bunnies, or doctor’s appointments, no dice. But there’s always next time. After all, tomorrow is another day. 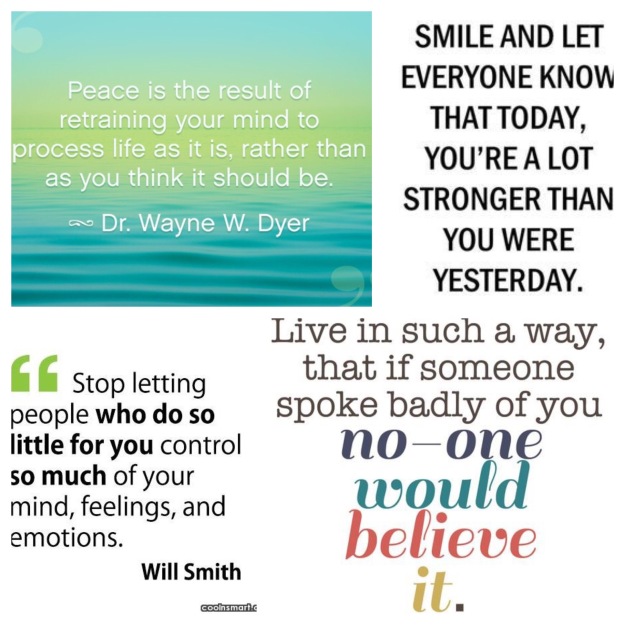 See, they’re relentless! Even as I was hunting these down for this post, I found myself thinking, “You know, Jen, these can really help you if you let them…”