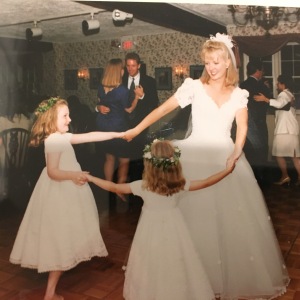 “Greek” dancing with flower girls at my wedding.

My 15-year-old daughter provides excellent material to write about: our conversations border on being totally unmanageable. She tops me with one-liners over and over and I just try to hang in there. Here’s a recap of some of our conversations from this weekend.

As you know if you read my rant about exercise last summer, Lizzie isn’t the biggest fan of physical activity, whereas I’m a huge proponent of getting exercise by doing outdoor things that you love rather than “working out.”
So, last Friday night:

Me: Will you come to a Greek dancing exercise class with me? It’ll be fun. It’s called OPA-cize.

Me: A bunch of women and their daughters are going, from church [we belong to a Greek Orthodox Church – the kids are partly Greek/Albanian/Romanian; I’m an honorary Greek]. You don’t even have to sweat. Besides, you have to learn that Greek circle-dance thing-y that everyone will dance at your wedding.

Lizzie: Can I get a shirt?

Lizzie: I’ll do Greek dancing with you if you buy me a cute shirt at that store I love.

Me: Deal. [yes, I let her bribe me just to get her to spend time with me]

At OPA-cize, Lizzie and I were the only two blonds in a roomful of beautiful dark-haired women, but we were all equally clueless about the new adventure in exercise. We all lined up confidently (but surreptitiously trying to inch behind each other to be in the back row). At first, the class felt pretty much like a low-impact aerobics class set to Greek music. But then the instructor says, “Now it’s time to learn a Greek folk dance. Maybe you already know it. It’s called Kalamatiano.”And EVERY SINGLE PERSON in the room except Lizzie and me made happy noises, nodding in recognition and clapping.

The teacher showed us the steps. It was kind of like: step, cross, step, step, forward, back, back, forward, forward, walk walk walk… Or something. Actually, it was probably nothing like that. Now, neither Lizzie nor I dance at all. And though the teacher went through the steps six or seven times before putting on the music, I still didn’t have it. Our close friend (and Michael’s godmother) Kathy stepped between Lizzie and me to help us, the whole bunch of us joined hands in a line,  the music started, and the teacher led us around the room. Everyone was stepping-crossing-hopping, and Lizzie and I shuffled along gamely, every now and then managing to step-hop at the right time. But then the teacher pulled a handkerchief from somewhere and formed an arch with someone and the whole line of us started twining in under the arch and then twining back around the beginning of the line like a drunken snake. I was stepping on feet and kept ending up facing the wrong direction. Somehow I managed to fall into Lizzie and knock her over, even though Kathy was still between us. No matter. We were all sweating and laughing by the end and declared OPA-cize a great success. 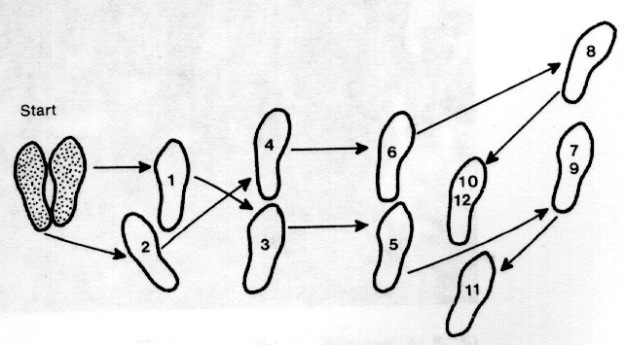 Memorize this. There will be a quiz.

But as we gathered for a photo at the end of class, Liz glared at me:

Liz: How is it that everyone but me knows that dance?

Me: I don’t know. I guess you haven’t been to enough Greek weddings.

Liz: I’m half Greek, you know!

Me: Not exactly. But I promise we’ll make sure you learn it before your wedding. I didn’t know it and we still danced it at Daddy and my wedding. I did my best. It was fun. Then someone stepped on my train and ripped it and I went into the bathroom and cried and then I came out and joined the dance again and we were all happy. I was really pretty.

Liz: Thanks for that story. 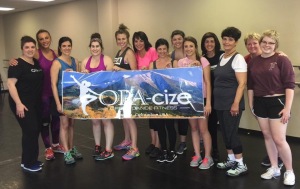 Guess which two are Lizzie and me…

Liz’s annoyance was mostly feigned; she admitted later that “the class was more fun than I expected.” I wisely said nothing but, “Good!” I felt smug, like I had proven in a single hour that physical activity can be fun.

Lizzie’s grandparents dancing at their wedding.

Me: Lizzie, want to go play racquetball with me?

Me (cajoling): If you play with me, I’ll let you drive there. And we can go for a ride afterwards. [Liz just got to the point in her driving skills where she is able to leave the parking lot and drive in traffic. She is now a driving addict and we’re considering a 12-step program.]

Liz: OK. But only if I can wear what I’m wearing. [T-shirt, jeans, and booties with heels]

Me: They won’t let you wear street shoes on the court. [Note that I didn’t say, “Are you insane? You can’t play racquetball in heels! You have no sense whatsoever. For God’s sake!” Score one for mom.]

Liz: How about flip-flops?

Me: How about Converse?

With that compromise, off we went (Lizzie behind the wheel). Now, the last time I convinced her to play racquetball, she never moved from the corner, where she stood with her hands over her head. She never moved her racquet. And she threw herself to the floor in terror whenever the ball came within 10 feet of her.

This time, Lizzie took her corner but held onto her racket. I served it (gently) and it bounced (slowly) in her direction. And she lifted her racquet and back-handed the ball, sending it like a cannonball (but small) into the front wall with such force that it flew by me and rebounded off the back wall. She didn’t even realize what she had done.

I didn’t say a word. I served again, and she slammed it against the far wall, again using a beautiful backhand with a nonchalance and confidence that stunned me.

You know those times when suddenly you’re in awe of your kid, when you’re amazed and grateful that you get the honor of helping guide them through life, when you realize they’re not yours and never have been, and that they belong wholly and fully to themselves, and you’re blessed just getting to go along for the ride? That was one of those moments.

Throughout the rest of the 20 minutes that she granted me on the court, though she never went out of her way to get a ball that was out of reach, she returned multiple serves, and if we were playing a real game (and if she were willing to leave her corner) she would have trounced me.

Me (trying not to gush): You have a killer backhand.

Me: Every time Michael or I try to use a backhand, we end up hitting ourselves in the head with the racquet. Or the ball. And you were nailing it! When I do manage to connect with the ball on a backhand, it rarely reaches the far wall. And you only threw yourself to the floor with your hands over your head once!

Liz: That’s because Michael wasn’t here. When we played last time, he was trying to hit me on purpose.

Liz: Well, he was hitting the ball in my direction.

Me: He was purposely hitting the ball on the other side of the court from you.

Liz: But he was hitting it really hard.

Me: He was hitting it as gently as possible.

Liz: Mom! Whatever! He was trying to kill me.

Liz: I just want to point out that I have exercised twice this weekend.

Me: More important, you have used your body physically to have fun this weekend.

Liz: Fun? I had fun eating popcorn this weekend.

Later, Liz finds me in the den while I happen to be writing about her.

Me: Hey, I was just writing about you!

Me: Our weekend fun.

Liz (getting immediately down to business): Oh, right. You owe me a shirt. Actually, I was just shopping online. Can I get a cute dress instead? It’s adorable.

Liz (staring at me for a minute): That is literally the stupidest thing you’ve ever said.

For all her playful snarkiness, she’s still my sweet little girl. Last night, feeling sick, she crawled into bed with me, and fell asleep while I patted her head. I went back to reading my book, but then put it down to peer at her. Her eyes were closed gently against her cheeks, her face was peaceful… And she was singing. Fast asleep, snuggling up to me, singing.

So, though I made her “exercise” twice this weekend, and have failed to teach her Greek line dancing, and let her brother attempt to kill her, and use words like “a-dork-able,” she still loves me. Yay, me.

2. Give in gracefully when you know you’re not going to win.

3. Before you snap at your newly driving daughter to use her turn signal, make very sure the turn signal is actually not on, or you will receive the contemptuous glare that only a teenaged girl can give.

Have fun until next time,

PS: Turns out Lizzie was feeling crappy because she has strep throat. I’m glad we fell asleep with our noses practically touching last night…