You know how your kids can wear you out faster than anything and you wind up acting more like an immature child than they are? Here’s an example of a 20-minute drive, with Michael being purposely, annoyingly contrary and Liz being teenage-girl-whiney, that has left me with the desperate need to run away from home and become a waitress at a truck stop in North Dakota.

It’s a Tuesday night and I was just at the Larimer County Fair with Lizzie, her friend Brenna*, Michael, and the kids’ cousin**, who is a year older than Lizzie. Liz wanted a goldfish and I had given the boys $5 for a bucket of ping-pong balls to try to win one for her. Michael chucked the first ball straight into a goldfish bowl, winning a fish right out of the gate. Then he told me that he was going to “give Liz shit” and pretend he wasn’t going to give the fish to her. “But you are going to give the fish to her,” I confirmed. “Of course,” he said. “I don’t want a stupid fish.”

So, as we leave the fair and head to the parking lot, Michael tells Lizzie she can’t have the fish. She complains that it’s her fish because I gave him the money to win a fish for her. He says it’s his fish because he was the one who actually won it. Then, she says that, on second thought, she doesn’t want to take care of a fish, she just wants to take a picture of herself with the fish. Predictably, Michael says he doesn’t want to take care of the fish, either, and that it’s her fish and she needs to take it. She says she doesn’t want it. I say that nobody better flush that fish down the toilet, and they need to figure out who is going to take care of it.

The four children, the goldfish (in a ballooning plastic bag), and I get in the car and start heading home. The conversation continues thus:

Liz: Really, Mike, you can keep the fish.

Me [a reminder]: Nobody’s flushing the fish.

Liz: I don’t want the fish.

Mike: It’s your fish. You have to take care of it.

Cousin: Give the fish away.

Me: Okay, but that was really funny. Why didn’t anyone laugh?

[I hear Michael rolling his eyes behind me.]

Liz: Before we ding-dong-fish, just let me take a picture of myself with the fish.

Me: If you take a picture with the fish, it’s no fun to ding-dong-fish, because Gilliane will know who left it.

Liz: That’s okay. But wait, look how cute he is! He’s adorable! I’ll just keep him!

Me: You guys are making me crazy.

Liz: But you can end it right now! Just make him give me the fish. I just want to take a picture with my fish!

Me [with a complete lack of authority]: Mike, give Lizzie her fish. She wants a picture.

Me [directed to neither child in particular]: What are you going to name the fish?

Lizzie: Phillip. Phillip the fish. But spell ‘fish’ with a p-h.

Me [in all seriousness]: No, spell Phillip with a p-h. That’s more amusing. ‘Phillip the fish.’

Liz: Mom, Phillip IS spelled with a p-h.

Cousin: You guys have absolutely no filters when you speak, do you?

Liz: We don’t need a filter for a goldfish. But, can a fish just live in water?

Me: As opposed to what?

Cousin: For God’s sake, a fish can’t live in chlorine! Chlorine kills algae. A bowlful of chlorine kills Fillip. Fillip with an ‘f.’

Mike: They can call him whatever they want, but his real name is Orange-y.

Cousin: Mike, why don’t you give it to your girlfriend?

Brenna: Mike has a girlfriend? How old is he?

Mike [exasperated]: Liz, you are so dumb.

Liz [curious rather than angry]: What? Why am I dumb?

Mike: I’m two years younger than you. Do you know how old YOU are?

Brenna: He’s thirteen and he has a girlfriend?

Mike [dreamily]: I love my fish.

Me: Mike, give Liz the damn fish. You’re being contrary. She just wants a picture. She’ll give it right back.

Liz: Mom! He’s texting his girlfriend and asking her if she wants a goldfish!

Mike: Jeez, Mom, why are you so upset?

Me [incoherently]: Why am I…? Are you freaking…? Just give her the…!

Mike: Mom, you’re doing the bulldog thing again, with the clenched jaw and the underbite.

Liz: [Taking multiple pictures of herself with the fish. Using the flash. In the car. At night.]

Me: Please stop taking pictures. I keep thinking a cop is pulling me over.

Mike: Liz, give me back my fish.

Mike: Julian says you’re a bitch because you won’t give me my fish back.

Liz: One of Michael’s two friends.

Me: Liz, give him the fish back. Then just tell him you don’t want to take care of it and that he can keep it, and then he won’t want it anymore.

Liz: But Mom, then he’ll flush it down the toilet.

Me and Cousin: Nobody’s flushing the fish!

Liz: Mom! He just posted a picture of Cutie Pie on Snapchat with the caption ‘Goldfish for Sale!’

Cousin: You’re not peeing again, are you?

Mike: You’re not taking this car to college.

Cousin: Remember how we were saying how nice it was that the people running the rides this year actually had teeth? But did you notice that the fish-lady didn’t have any teeth?

Me: I did notice that. I guess the toothless carnival people are hanging out at the fish game this year.

Cousin: But last year, though the ride operators were all missing a few teeth, they still had some teeth. The fish-lady had no teeth. So there’s still the same proportion of missing teeth this year as last year, just differently distributed.

Mike: Fascinating conversation. Liz, give me the fish.

Mike: Mom! You promised she just wanted to take a picture and then she’d give me the fish!

Me: You promised at the very beginning of this fish fiasco that you just wanted to give her shit about not giving her the fish and then you’d give her the fish.

Mike: You promised you’d give me money to play games since I didn’t want to ride any rides. You didn’t say I had to give my prizes to Liz!

[Seriously, people, that was a real question: why was I discussing this?]

Me: If you guys pop that fish, so help me God…

So, guess what, friends? I have no idea where the fucking fish is right now. We’re home. We passed by Gilliane’s house without stopping so I’m pretty sure they didn’t ding-dong-fish her, but she lives just a house away so it’s possible they went back out with Fillip-Cutie Pie-Orange-y to leave him there. Yes, my kids are 13 and 15 and it is 10:40 pm and I have no idea if they are in the house or not. To be honest, I don’t care. I just want to go to bed. 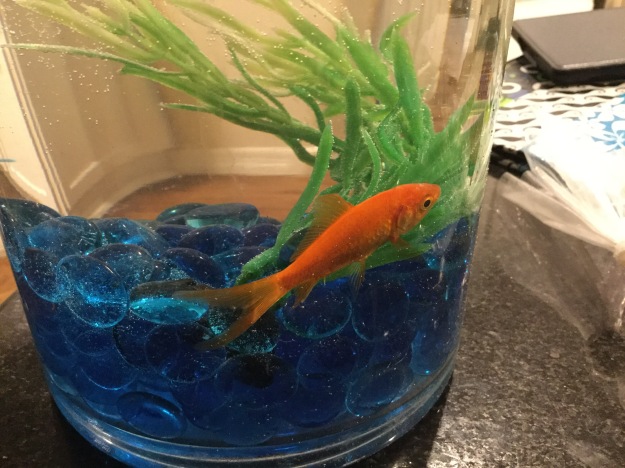 Fillip made it to a bowl, apparently. Let it be noted here and now that I will NOT be the one caring for this fish.

Anyway, so as not to ruin your vacation-induced calm, don’t let your kids make you too crazy. Try to have fun with them. Barring that, use swear-words and make the bulldog face and talk with your jaw clenched until they stop being jackasses.

PS: Michael just came into the den and asked me to make him some food. I responded – rather pleasantly, I thought – with “Hell, no.”

PPS: It’s likely you’re thinking that Fillip cost me $5.00 at the fair, when I could get a goldfish at PetCo for about $1.89. If I just bought the kids another damn fish, the average goldfish price for the household would be about $3.45, which I’m pretty sure I can afford. But there’s no way in hell that I’m going to award such ridiculous behavior by buying another fish.

PPPS: ‘Fish’ is one of those words that, if you hear it often enough, doesn’t make sense anymore. Fish, fish, fish. Fish. Ugh!

*The name of the friend has been changed to protect the innocent.

**My nephew’s name has been left out to protect the innocent, as well, though he is actually as devilish as my own kids are.