Please note: there is no moral to this story, I offer no insights or inspiration. However, it may serve as a cautionary tale. Most likely, it’s just a bunch of random nonsense. And there’s no thesis statement. Whatever.

When I got to the lake with my paddleboard this afternoon, the temperature was in the low 80’s, the lake was quiet and peaceful under a very slight breeze, and I took off for a quick paddle. But just a minute or two out from the dock, the lake was disrupted by these large waves that came rolling toward me from literally nowhere. They were fat and round and fun, like those thrown off by a pretty big or pretty fast boat, but there were no boats in sight. Not a single one. Huh.

No matter: I had fun paddling over the waves and forgot about it, but soon my board was lifted from behind as another bunch of wake-type waves rolled under me. Again, no boats were visible. It was like a large creature – maybe a lake-whale? is that a thing? – was surfacing and submerging like Moby Dick. Somehow the thought of Moby Dick brought to mind a Stephen King story (everything in life seems to lead back to a Stephen King story, doesn’t it?) about some kids who swim out to a raft in the middle of a lake on an autumn day, and this jellyfish-type creature basically, you know, eats them all. The creature in the story was definitely big enough to throw off a wake. Could it be that there’s something large, hungry and undiscovered living in Horsetooth Reservoir? (Don’t scoff, it’s possible, you know — we’ve all heard of the Loch Ness Monster.) 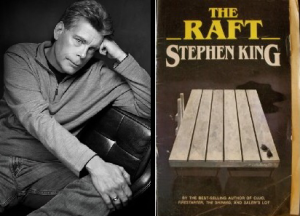 So I’m paddling along, thinking about Occam’s Razor (that philosophical argument which basically states that the simplest explanation for something is the most likely one): There’s no wind, so the wakes must be caused by boats or Stephen King-creature. No boats are in sight: if boats are causing the wakes, they are clearly invisible. So what’s the simplest explanation: invisible boats or man-eating jellyfish? 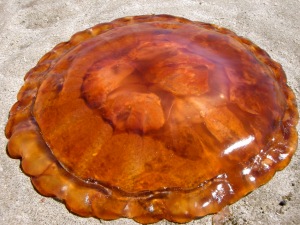 Like this, but 10 feet across and, you know, hungrier.

Now, this is where it gets tricky. Because I’m thinking that invisible boats are more likely to exist than great bloodsucking jellyfish, so the answer must be invisible boats. But, if invisible boats do actually exist, then we may have underestimated the world we live in. If that’s true, isn’t it equally likely that scary lake-creatures exist, as well? And if they both exist, which of the two is the simplest explanation? My head was about to explode as I tried to figure this out. Finally, it came to me: My God, the wakes were obviously being caused by BOTH invisible boats and giant jellyfish!

Satisfied at having solved the riddle (and surprisingly unruffled by the solution), I was ready for a quick cool-down, so I jumped in the water. And though I wasn’t too concerned about the fiendish jellyfish, I admit that, as I was treading water, my legs felt quite vulnerable kicking around down there in the dark.

Yup. That’s how I spent my afternoon: bravely dodging invisible boats and man-eating jellyfish. What did you do today?

PPS: Writing this was kind of stressful. It was like writing a term paper, trying to lay out my argument, support my claims, and sum it all up succinctly so you would believe my conclusion. Shit! What did I do with my thesis statement? Oh my God, you might have no idea what I’m talking about if I haven’t laid out my thesis statement correctly! Um, well, you probably have no idea what I’m talking about anyway, so no big deal.

PPPS: Seriously, these are the actual thoughts that went through my head as I was paddling. There is something very wrong with me.

Have fun til next time.