Lizzie is bopping around the kitchen, singing the phrase “own your own crazy,” a good message for me right now since I am currently feeding my rabbit applesauce from a soup spoon and I could feel embarrassed about it if I let myself. It is one of the cutest things I have ever seen, especially since the applesauce dribbled down her little rabbit chin and her little white chest (just like a baby) and now she is busily cleaning her fur with her adorable little rabbit paws. When I tried to show Liz how cute Beatrix was, Lizzie said, “That’s just great,” (without even looking!) and wandered off. So I think Liz has a double standard: she advocates for owning her own crazy but she’s not willing to celebrate my crazy. What kind of a daughter is that? Anyway, I’m thinking that middleage is a great time to start owning our crazy. We’re old enough to stop giving a f*** (mostly) about what other people think.

Not that feeding a rabbit applesauce while crooning to it in baby talk is particularly crazy. Maybe eccentric at the most, which is good, because, while “owning your own crazy” is a great concept, there’s a limit to the amount of crazy that’s socially acceptable. But how the hell are we supposed to know where that limit is? Too little crazy and you’re boring. Too much and you’re arriving at the pharmacy in pajamas and bunny slippers because you forgot to get dressed that morning and the pharmacist asks if you are on pain killers, which you are not.

OK, we all know that, for example, wandering through the neighborhood in our birthday suits is too crazy (which is fine  because I have no desire to wander around naked, even in my own house, and besides, the neighborhood association would frown upon it). So, naked neighborhood-wandering is too crazy. And feeding your bunny applesauce from a spoon is probably on the low end of crazy. But where do you draw the line?

Help me out here. Let’s rate “crazy” behavior on a scale of 1 to 10, with 10 being batshit crazy and 1 being normal, boring crazy. It may help us all to know when we’re starting to go around the bend and it’s time for some margaritas. Or Valium.

1. Kid crazy: Standing at the kitchen counter eating pickles straight out of the jar and thoughtfully comparing them in flavor to pumpkin spice lattes while screaming at your brother about who gets to eat the rest of the Doritos (even though you don’t actually want any Doritos) and who dropped all the Doritos on the floor and who then stepped in all the dropped Doritos. Crazy score: 10. Totally crazy, but they’re teenagers so hopefully they’ll grow out of it. 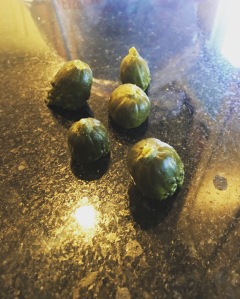 Leaving pickle-butts standing up on the counter: crazy?

2. Hoarding crazy: collecting too many things, such as shoes, newspapers or souls.

4. Dieting crazy: eating only white foods or only citrus fruit or only foods a squirrel would eat, or going on the Santa Claus diet or the Simba-Poomba-Timone diet where you only eat grubs. 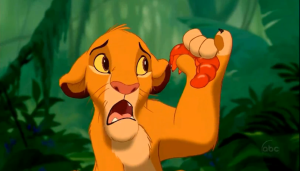 5. Compulsive lying crazy: (I’ve never lied in my life, except that one time when I was a tightrope walker in the circus and I had to tell George Clooney that I couldn’t marry him because I was leaving on my round-the-world cruise but I didn’t want him to know that I owned a cruiseline so instead I told him I couldn’t marry him because of his hair).

6. Living vicariously through your kids crazy: forcing them to engage in all the activities you wish you had engaged in, like baton twirling, football, or beauty pageants, and not letting them quit, even when what they really want to do is join the mathletes or make sock puppets.

7. Dressing as a zombie on Halloween crazy: sitting really still on a bench on your front porch so that you look like a tacky but expensive prop from the Spooktacular store and then jumping up and lurching at little kids right when they’re inching past you, and the kids  scream and drop their candy and run away, and you laugh with sadistic glee and give toothbrushes instead of candy to the kids that stood their ground because you’re a dentist in real life (another form of crazy). Crazy score: 10

8. Putting a pilgrim-style bonnet on your rabbit crazy: humming a little Thanksgiving song to her that you made up because there aren’t really any Thanksgiving songs out there except Over the River and Through the Woods and nobody really knows whether that’s a Thanksgiving or Christmas song, anyway.

9. Becoming addicted to the Gilmore Girls and always thinking you’re a bad mom crazy: watching the wonderful mother/daughter relationship on the show and beginning to question your every exchange with your daughter because you’re comparing it to the cool and sexy Lorelei, wondering if you’re not a good enough “friend” to your daughter or if you’re trying to be too good a friend, and freaking out, and then calming down for a few minutes when you realize the show is fiction, and then starting all over again…

Guess what? It’s really hard to judge anyone else’s craziness. “Crazy” is, obviously, subjective and who am I to judge? (And no, I didn’t put a pilgrim bonnet on Beatrix but if I had a little bonnet or knew how to sew one I definitely would.) Sure, in my book hoarders are a little bit crazy, but who knows? Maybe they have a reason for all the stuff they keep. And maybe I’ll be a hoarder one day. And maybe on a Crazy Scale of 1 to 10, hoarding is only a 2, because there are a lot of crazier ways to be crazy.

Notice, however, that I did give the dentist a Crazy Score of 10. That guy actually lived in our neighborhood. The high school kids found his antics equally terrifying and hilarious, but the kindergarteners — the tots who had just mustered enough courage to go to the door without their parents — were traumatized for life and have probably grown up to be those people who turn off the porch lights on Halloween and pretend they’re not home because the witches just might be real. The dentist zombie delighted in making small children cry and I think his kind of crazy may have an actual name, like sociopath.

I’m sure Lizzie was singing the song without paying attention to the message (when I ask her what a particular song means, she always shrugs and says she doesn’t pay attention to the words, which makes me, um, crazy). Still, she seems to own and embrace her own crazy a lot more than I ever owned mine. Like the time she wore a fake mustache to school in seventh grade and kept it on all day and also tied a giant, cape-like scarf around her shoulders and walked down the hall like an adorable mustachioed super-hero. It was not Halloween.

It would have been fantastic to learn to own my own crazy when I was her age rather than spending a large portion of a lifetime trying to hide it, which leads me to:

Life goals, people: celebrate your crazy. Don’t hide it under a bushel. Because I have an inkling that another word for crazy is, sometimes, just plain fun.

Till next time, friends

PS: You know what’s crazy? I sat down this afternoon to write about how to accessorize when you have a short neck, but Lizzie’s song derailed me and I think this is more interesting than talking about how to tie scarves and what type of neckline to wear. Though, really, scarves are so fashionable, and I’ve been wanting to learn how to wear one without looking like an Oompa Loompa. Also, apparently I am supposed to avoid turtlenecks like the plague.

PPS: I got some great comments, here and on Facebook, about how to manage the whole dinner situation, which Lizzie says is because I specifically asked for comments. So I’m asking: how do you own your own crazy?

PPPS: When I get to a certain length of an article on WordPress, there begins to be a lag between when I type the letters and when they appear on the screen. My iPad seems unwilling to keep going. I think it’s WordPress’s way of saying, “Nobody wants to read any more.” Which is how I know when to stop. Which is now.

4 thoughts on “9 Shades of Crazy, Deal with It”