I want my life to be this.

I’ll jump right in: The three other newbies in yesterday’s Intro to Pole class were, as feared, young, thin and relatively athletic looking. They were college friends, and when the instructor, Tausha, asked why we wanted to learn pole dancing, they said they wanted to “dance against a wall” for their boyfriends. Huh? Tausha asked me what aspects of pole was I most interested in – athletics, strength, dancing, sexiness, acrobatics – and obviously I said acrobatics. Because if I could learn to hang upside down from that pole and do other cool circus kind of stuff, that would be my jam.*

So here’s a quick synopsis of my first pole dancing experience.

I should have expected it, but it never even occurred to me. Ever since I had my babies, my equilibrium is off and I get motion sickness at the drop of a hat. Even watching a merry-go-round makes me sick. When I was taking my boot camp class, there were many sit-up and bending-over type things that I couldn’t do because I’d end up feeling dangerously pukish. I can’t even swim laps for more than half an hour (which I haven’t done in a couple of years)** without getting sea sick.

I’m mastering these spins and feeling athletic and not the least middle-aged, and suddenly realize that I’m not just a little nauseated, but am on the verge of losing my pre-pole-dancing snack (almonds and a big bottle of water, because now I am a healthy dancer). I was so sad and depressed and pissed off and sad. And did I mention sad?

So I sat against the wall feeling crappy and trying to settle my stomach. When Tausha taught non-spinny moves, I’d get up and learn them. When she linked the non-spinny moves to more spins, I’d skip them. After awhile, I tried the spins again, but immediately felt sicker than before. Finally, I just had to sit out and watch, and never even got up to put all the moves together at the end in a full-on choreographed pole dance.

However, even though I sat out and missed a bunch, Tausha says I learned enough from Intro that I qualify to do the beginner classes, if I care to go back. And I DO care. I will take Dramamine. Or chew ginger. I also found some exercises that are supposed to retrain your eyes and your inner ear or who knows what. Most of the people who talked about this online (apparently it’s a common issue) said that if you stick with it, your mind adjusts and it goes away (the nausea, not your mind). As a side note: Most of the people who have motion sickness issues on a pole, though, are actually on a “spinning pole,” which I don’t even know what that is (sorry about that sentence, grammar police). I guess there are static poles, which I was learning on, and spinning poles. Just the thought of those…ugh.

Meet Tausha. She was great.

Tausha teaches a beginner class on Wednesday night, so I’ll try the seasick meds and the ginger and see how it goes.

PLUS, people, I found a local studio that teaches “aerial arts” and I’m going to meet with the “instructor and performer” there this week. Did you know I took a tightrope-walking class in college? Yeah. And I got credit for it. Also, I just looked on their website and saw that one of the teachers there is a “handstand mobility instructor.” WHO ARE THESE MARVELOUS PEOPLE??? 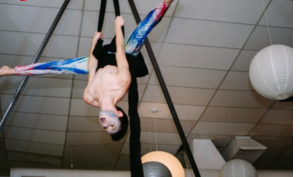 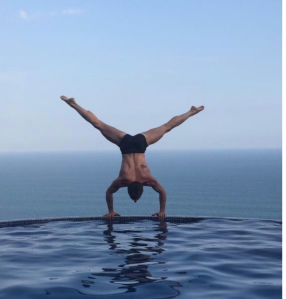 So if you find your life is lacking some luster, maybe try to find one thing to be passionate about and see if you can somehow bring it into your life. Cause I’ll tell you, just looking forward to my next pole class and meeting the circus people makes me feel pretty damn passionate.

Have fun ’til next time,

*A friend of mine posted on Facebook that some guy she was considering going out with said his job “was his jam” and she said she couldn’t date anyone who said that. Her friend commented that she shouldn’t discriminate, because maybe he worked in a jellies and preserves factory. Ever since then, I find myself using the phrase, which I had never actually heard before.

**Speaking of swimming: remember yesterday when I detailed all my unfortunate sporting experiences? Well, Angel reminded me of one of the worst, which I guess I had blocked out. I was training for a sprint distance triathlon and was swimming quite a bit. By that I mean that I could swim laps for up to an hour without drowning. But I was very, very, very, very slow. (In fact, during the actual triathlon, Paul, who was videoing the event, actually turned off the camera because I was getting passed so often that he didn’t want me to feel embarrassed. He told me this long after the fact.) Anyway, I knew I was slow, but I was also in pretty good shape and wanted to get better at swimming, so I showed up at a Master Light open swim at my pool. I talked to the coach who told me what all the tasks on the chalkboard meant, and told me to have at it. I told him I was slow so he put me in the slowest lane. So I’m struggling along, totally not understanding what I’m supposed to be doing or when to switch to the next stroke or speed or whatever, and I swim headfirst into the woman who’s coming back on the other side of my line. I apologize. She shakes her head. We swim away from each other. Gamely, I keep going, trying so hard to keep up that my vision starts to go dark because I’m not taking in enough air with each stroke. I stop and stand up and pant for a minute, then start again – and bump into the woman on the other side of the lane. Again, I apologize. This time, instead of just shaking her head, she says, “Just follow the line on the bottom of the pool,” and swims away. Less enthusiastically, but still determined, I swim on. And guys, will you believe me when I tell you that I swam headfirst into the same woman again? True story. I apologize. She says, “Just follow the line on the bottom of the pool! I mean, you can see it, right? Can you see the line?” She swims off.

No longer determined, no longer game, I have to tell admit that I climbed out of the pool and fairly ran for the locker room and, yes, I was crying. It was 5:30 in the morning and a woman was being mean to me just for trying something a bit out of my comfort zone. I hate her. Never went back. Still love to swim, though, so fuck you, mean, swimming-lane-line, crazy-woman!