You know me: I’m the one always encouraging you to ditch work, to take a snow day, to join me at a silks class or climb a tree, to run an obstacle course. Responsibilities are boring, while fun is – well, you can finish that sentence all on your own, I bet.

I have fun friends who are generally pretty easy to convince to blow things off and run away with me, but lately I’ve been thinking there aren’t enough of you. And some of you are pretty fucking far away (not cool, you guys).

So I was thrilled last weekend to be reminded that some of the funnest people – the really wacky ones, the ones who get me – are, for better or worse, related to me. And it happened, strangely enough, during the weekend of my mother’s memorial and Celebration of Life party.

It’s Phoenix in mid-September. It’s 115 degrees and I’m in a pool with my brother Tim and my sis-in-law, Angel. We’re talking about Mom, and about the memorial, and about small moments of inevitable family strife. Then we all fall silent, having simultaneously come to the end of our tolerance for serious topics. Tim looks around the large, resort-style pool – complete with an island for sunbathing in the middle – and says musingly, “We should have a backward race around the island.”

Before the words are out of his mouth, the three of us are flailing arms and kicking legs, propelling ourselves backward with great inefficiency. I’m not sure why none of us think to actually swim. Instead, we are attempting to use each other as starting blocks from which to kick off, attempting to dunk each other, and shouting, “You’re cheating, you can’t go forward!” (Remember that, at 50 years old, I’m the youngest of the lot.)

When we reach the far side where assumed we would turn to go around the island, we realize that the pool ends – it’s actually U-shaped and not an island at all. With nowhere else to go, I shout “barrel roll!” I fling myself onto the (flaming hot) cement between the two halves of the pool, rolling myself across it and into the pool on the other side. Tim and Angel don’t hesitate to follow.

About halfway back down the other side, we realize how insanely hot 115 degrees is, even in water, and how circumnavigating a pool like flamingoes trying to take off backwards is not exactly an easy workout. We putter out at the same time and resume conversation without bothering to declare a winner. (Extremely unlike us, now that I think about it. I’m calling it now, though: I win! Suck it!)

On another day, I took a (blazingly hot) walk with another brother (Mark) and another sister-in-law (Donnette). As we switched sides of the street to make the most of the shade on each side, we contemplated a potential mathematical formula to determine whether the coolness of the shade was enough to counteract the energy we were expending by cross-crossing the road. That led us to muse on the density of shade coming from different trees. If the shade was dappled with sun, it was less cooling, obviously. More shade = more cooling. So the higher the Dapple Factor (DF) of any particular tree (or car or house or telephone wire), the better.

Palm trees, we discovered, have a surprisingly high DF. Telephone poles have a perfect 10 DF, but they’re narrow and only one person can benefit at a time. I actually argued that what we really should be going for was a low Dapple Factor – we didn’t want dappling of the sun, we wanted full-on shade, which means less sun-dappling, which means a low DF – but Mark convinced me that the shade was the dappled part and if we wanted full shade, we were going for a high DF. I still kind of think I’m right, but I let him win in the name of sibling harmony. (Besides, I had already won the backward race.)

My mom’s last email to me said that “her chicken” had flown in from Mackenzie Childs (her favorite catalog). “I love her. I call her Chicken,” Mom wrote. I was lucky enough to bring Chicken home with me, which led to an entertaining evening texting back and forth with Mark last night. 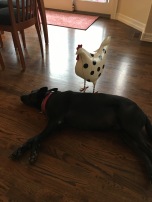 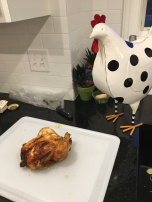 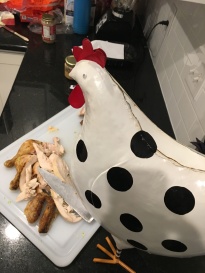 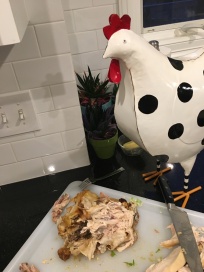 It was a busy night for all of us. First we tried to figure out where Chicken’s coop should be. Mark thought the first two spots were nice visuals but inconvenient, to which I agreed. Chicken then took time to lurk over Sophie while she napped. There followed some existential thoughts on life and death, hunger and satiation and cannibalism. We finished the night with a Chicken salad.

So, yeah. That kind of kind of weirdness. That kind of fun. That kind of family. They rock. I should have known that I didn’t actually have to go very far to find such wonderful bizarre-ness (though Phoenix in September really does seem like a foreign land).

I guess it’s not unusual that losing a family member makes you want to hold the rest of them closer. We’re scattered all over the country, but I hope we’ll commit to sharing our weirdness more often. I’m sure we will (right, guys?).

Actually, it’ll be easy. I won’t even have to go to the airport. I’ll just take Chicken.

Have fun ‘til next time,
Jen

PS: My brother Paul spends a fair amount of time making faces at himself in mirrors and pointing out any particularly grotesque ones he manages. I didn’t catch him doing that on this trip, but in his honor, I thought I’d share one of my faces this week. I had a dental procedure-thing (Mom would have called it surgery) when I returned from Phoenix and ended up surprisingly puffy (God, another Mom reference: “Do you think Jen looks puffy?”). The family has gotten a kick out of trying to make me laugh (not to cheer me up: laughing hurts my face).