Before I explain about dinner, I need to leave myself a trail of breadcrumbs here because I’m afraid I’ll get distracted again before I get to the end of this post and forget how I was planning to wrap it up. So – spoiler alert: Jen, don’t forget to bring it back to multitasking.

(Look at that: the second half of “multitasking” includes the word “asking.” What should you ask while you’re multitasking? You should ask for help, obviously. Then you wouldn’t have to multitask so much, and then… well, you can see why I needed to leave myself a clue, here. I’m already way off topic. It’s been one of those days.)

But back to dinner:

I’m often frustrated by the extent to which I forget things, make a muddle of things, procrastinate, or fall into the quicksand of confusion when I’m trying to do more than one task at a time (which is always). These tendencies can be annoying (deciding that I want coffee instead of my usual tea, but then somehow finding myself 10 minutes later with a cup of tea in my hand) or majorly inconvenient and expensive (leaving my retainer where the dog can find and mutilate it – TWICE). And my brain fog gets worse with the more tasks I add to my list.

But today was the first really gloomy fall day, and I found myself giving in to the fit of cozy domesticity that demanded I make lasagna with meatballs and a Caesar salad with homemade croutons. Since my dinners are usually more of the pre-cooked chicken from Safeway with boxed mac and cheese variety, this was ambitious. Still, I felt I was up to the task.

My meatball recipe comes from – don’t laugh – The Sopranos Family Cookbook, a bizarre mix of recipes “compiled by Artie Bucco, chef of The Family’s restaurant,” photos from the TV show, and commentary from the fictional characters. You might find it interesting to note that Bobby Baccala, for example, suggests that velour sweatsuits are always in style but cautions readers to stick with maroon or fuchsia, not baby blue, while Junior shares his Rule of Rules: “Don’t whine. Nobody cares.”

Strange book – I find it hard to wrap my mind around a book that offers real recipes from a fictional family – but the meatballs are great.

So there I was, making croutons, spaghetti sauce, meatballs, lasagna and salad dressing. I was chopping and blending, mushing meat and sizzling garlic, preheating the oven and grating cheese and rinsing lettuce (I didn’t even buy the lettuce in a bag!).

I was also washing dishes that had been left in the sink, making Paul a sandwich (because I’m nice and because he was too cold to come out from his blanket), texting a friend, and watching Gilmore Girls. So what happened next probably won’t come as a surprise. 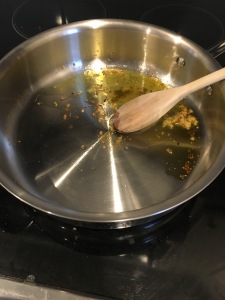 I was rocking it. I was having a blast. I was in a groove. I was…

My next picture to DeAnna: 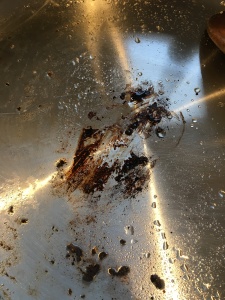 So busy taking proud pictures of my cooking that this happened…

No problem, because I am a chef, just like Artie Bucco, I tell you. I simply started the spaghetti sauce over: olive oil, garlic, oregano… Meanwhile, chop some parsley, slice some bread, and hey, look at the TV: Lorelei is dropping Rory off at Yale for her first year of college and damn, that will be Lizzie and me next year, and…

“Oh my God, I literally did it again.”

Anyway, DeAnna pointed out that multitasking might be a good topic for today’s blog, and she was totally right, because it suddenly struck me: Maybe the whole brain fog, ADHD, I’m-so-lame-because-I-can’t-stay-on-task belief is just plain wrong. Maybe my brain is simply over-full and I’m multitasking my motherfucking ass off.

It’s not just me. I bet all middleaged women with kids and families and jobs and hobbies and big lives have brains that are over-full. And obviously, if you fill a vessel to the top, then it overflows and you lose stuff. I mean, who can remember that they have garlic sautéing when they’re reminded that their daughter will be leaving for college (destination as yet unknown) in 10 months?

I think I had more to say. But I started cooking at 2:00. It’s now 9:15. I just finished eating dinner with the family and cleaning up. This post has been written in fits and starts throughout the day. (More multitasking!) My brain is now broken.

All I have left is a word of advice: next time something doesn’t get done, give yourself a break. You’re doing a great job. I bet for every little task that falls through the cracks, there are 301,722 things that didn’t.

Anyway, have fun ‘til next time.
Jen

PS: I also burned the meatballs. But only a few of them. The dogs didn’t mind.

5 thoughts on “Tell Oprah to Shit Up, and Other Sunday Wisdom”