When I was a kid, I had a Wonder Woman outfit. Not the cheap plastic-y kind you get from a Halloween store today, but a homemade, kick-ass one: blue shorts with ironed-on white stars (unevenly cut out by my seven-year-old hands), a white t-shirt with red stripes, and a length of twine wrapped around a belt loop for a magic lasso.

Best of all: bullet-deflecting silver bracelets my brother Tim cut for me out of an empty Maxwell House coffee can. (The unfinished edges of those bracelets were deadly and often caused tears, but somehow I never considered not wearing them.)

Anyway, nobody idolized Wonder Woman the way I did, and I had the outfit to prove it. I felt like a bad-ass whenever I wore it – which was pretty much every day for years.

So in August, when my aerial silks teacher invited her students to perform in a student showcase themed “Heroes and Supervillains,” I had no problem choosing a character. The tough decision was whether to be in the showcase at all.

I started taking aerial silks classes exactly two years ago. I love everything about them: the art form, the exercise, and the people – the very young people – who have become my friends. I add that last point simply because I am by far the oldest aerial silks student at the studio, and sometimes that bothers me.

In body and mind, I don’t feel old. But I must admit that I occasionally feel out of place. Nobody has ever made me feel that way – everyone who goes there is supported and beautifully encouraged by students and teachers alike, regardless of age, experience or fitness level. My problem does not stem from how I’m treated or how I feel, but from how I think it looks to outsiders.

I wish I was beyond caring what people think, but after hearing about the showcase, I tormented myself for weeks, thinking how ridiculous I’d look dressed as Wonder Woman and performing amidst the “kids” (of whom the oldest, not including me, is 35).

But as I said, I love my aerial work. So I allowed myself to be persuaded that I’d be “great,” and began working on a routine.

I had some bad moments preparing. First, I had to shorten my routine several times. The song I chose was four minutes – which, it turns out, was at least a minute too long. I got more and more miserable every time I failed to make it all the way through, and started saying a lot of mean things to myself about my lack of endurance. At least twice, I left class in tears of frustration. Meanwhile, the other students were putting together highly athletic performances with (it seemed to me) very little trouble.

I experienced other bad moments because of my costume, which included a red leotard, blue Wonder Woman leggings from a Halloween store, a pair of blue bloomers with white stars, a gold tiara, and silver gauntlets (“bracelets” must have stopped being impressive sometime between the mid-seventies and today). Anyway, when I tried it all on, I wanted to cry (again). I looked… foolish. The leggings felt cheap and tacky. And the boy shorts, while cute in the package, made me look like a potato. 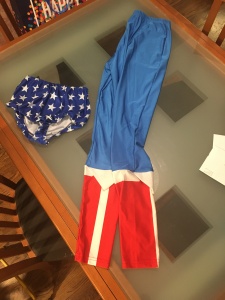 During dress rehearsals, the rest of the gang (aka: “the kids”) assured me I looked great, and pointed out their own “silly” outfits: one-piece black unitards, for example, with superhero symbols across the chest. The difference was, they could pull it off; I couldn’t.

I don’t know if it was my age that made me feel so awkward, or if it was just my age in comparison to everyone else. I was confused, because nowhere else in my life do I think of myself as “old.” Sometimes I joke that I’m old, and my kids certainly love to tell me I’m old, but I never actually feel old. So maybe it was my fitness level, or my body shape and size, that had me feeling miserable.

Well, I’m happy to report that I didn’t give in to the mean voice in my head. I did make minor wardrobe adjustments, though. I traded in the Halloween store leggings for a classier pair, and skipped the starry boy shorts that were adorable only in theory. (Obviously I kept the tiara and gauntlets.)

We performed in a barn at a winery during a fall festival party, where the guests were happy and pink-cheeked and wine-drinking. The performers gathered in the unheated loft while we waited our turns. Chilled, I became convinced that my hands would be too cold and slippery to hold the silks, and spent a full hour shaking and flicking them to warm them up, to the extent that I could hardly bend my fingers the next morning. Still, time managed to pass and much too soon, it was my turn.

I had thought there were only a handful of spectators, but – in an unexpected and not entirely welcome development – I saw that most of the people were sitting under the loft where I hadn’t seen them. There must have been 50 or 60 people, not the dozen or so I had thought, but there was no help for it except to throw myself into my routine. So that’s what I did. I climbed, wrapped, flipped, dropped, posed, and spun. I pointed my toes and tried to remember to make my hands pretty. I went big and I went bold.

Forgot to say I also had a shield! Which I used for all of two seconds. 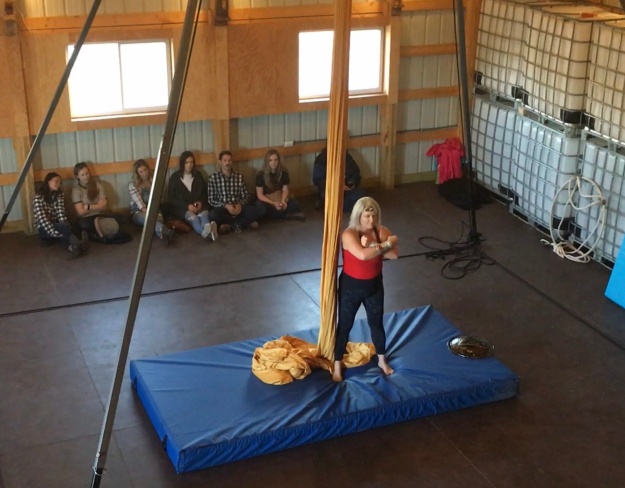 Dramatic pose where you can see my gauntlets really well…

And guess what? It turns out I love performing.

I didn’t do it perfectly. My performance was not a show-stopper. My tiara slipped. I struggled in the spot I always struggled. I wasn’t particularly graceful. It may even be true that some people were thinking, “Who is she trying to kid?” Or, “Hey, look, her ass looks like a potato.” But, for those three-plus minutes, I wasn’t thinking about my age or my shape or my struggles. For three minutes, I was totally in the moment and doing what I was there to do. It was so much fun.

You know how friends are always saying things like, “Be kind to yourself?” or telling you to change the messages you give yourself? I’m not going to say that, because when the mean voices in your head start saying you’re too old or fat or short or dumb or whatever, it can be really hard to ignore them.

I’m thinking it might be too much to ask ourselves to change the message completely. Maybe it’s human nature to give ourselves shit sometimes, and stopping those voices is actually impossible. But I’ll tell you, overcoming that mental trash talk feels really, really great.

Next time your treacherous brain tries to stop you from doing something you love by shaming you with nasty words, by all means, shut it down if you can. But if you can’t, consider just saying, “Fuck it,”  and do what you want to do in spite of feeling shitty. Because, while it’s sad that you might find yourself believing the voice that tells you you’re worthless, it’s even sadder if you let it stop you.

On the other hand, if you’re brave enough to be yourself in spite of those voices, you might find that you feel hugely empowered. You might feel vibrant and strong and capable and…

Well. I can’t tell you how you’ll feel. I can, however, tell you how I felt – except I don’t have to, do I? I think you already know.

When I ignored the mean voices and did a kick-ass routine in front of dozens of people, when I took a dizzy bow to the applause of a lot of strangers and the cheers of some really great, really supportive performers, how did I feel?

My friends, I felt like freaking Wonder Woman. And the best part is, a month later, I still do.

Have fun until next time,

8 thoughts on “What Happens When You Say ‘Yes’”