What a Christmas break! I’d say it was about 3 months long… not that I vacationed from work or life (as if!) but I haven’t blogged in ages. It’s like when I was an angst-filled teen and young adult. I’d keep a journal for months or years, but if I skipped a certain amount of time, I’d begin to think that I had too much to catch up on, and the task was too daunting… and it became more daunting the more time went on. And it’s not like I had to fill in all the missing days — nobody was reading it but me. But even here, the longer I was away from writing, the harder it became to get back to it. Which, I guess, is the same for everything in my life, and maybe in everyone’s life. Exercise, healthy eating, enjoyable passtimes: the farther I get from the days when I engaged in those things, the more difficult — and eventually nearly impossible! — it feels to get back to them.
END_OF_DOCUMENT_TOKEN_TO_BE_REPLACED

Here is why I am qualified to offer this eye shadow lesson:

1. I’ve recently talked to a couple of “makeup artists” at Sephora and they showed me how to do eyes, so clearly I am well-educated in the art. Also, having bought way too many Urban Decay color palettes because I appear to be addicted, and having spent way too much time playing around with them and making myself late for things (sorry, DeAnna), I thought I’d share some of the fun I’ve been having;

2. Angel told me she liked the way I did my eye shadow, on a day that I had experimented with “smokey” eyes, so I am obviously a professional. (And don’t go all, “Who the hell is Angel? Jen should really tell us who she’s talking about,” because I’ve written about her a number of times, and I’ve told you that she is my sister-in-law and one of my very bestiest of besties, so pay attention, people! I will not be explaining this again.)

Anyway, here’s how I’ve been doing my eye shadow. A few things to note:

1. I thought this was bullshit, but it turns out that it really does help to have a variety of brushes. Depending on the firmness or softness of the bristles, the thickness of the brush, and the shape of the brush, you have more control over how the eye shadow goes on.

2. Make sure to tap off the excess from the brush before you apply it. If you don’t, flecks of eye shadow will sprinkle onto your cheeks like fairy dust and no matter how pretty the color is, you probably don’t want it on your cheekbones. (Also, it won’t make you able to fly no matter how much you clap your hands and believe in fairies, so don’t bother. I’ve tried it and it just doesn’t work.) Additionally, you are more likely to get a clump of color in one spot when the brush first touches your skin. In a similar vein, avoid using a heavy hand when applying it. Brush very, very lightly. If you apply the eye shadow with too firm a hand, it is harder to spread the shadow evenly and harder to blend. (The Sephora lady showed me the truth of this but I don’t feel like taking more pictures to prove it, so you’ll have to trust me. Which I hope you do. Because if you don’t trust me, why are you reading this in the first place?)

3. I had a third tip, but now I can’t remember it, and don’t tell me I probably only had two but only thought I had three because I have ADHD and tend to forget pretty much everything (see what a convenient excuse it is?). I KNOW I had a third tip, because I specifically went back to the sentence above that says, “A few things to note,” and changed it from “a couple things to note,” because I wanted to be specific and a couple means “two” and a few means “three,” so what the hell was the third tip? argh!

Anyway, for what it’s worth, here are my personal steps to sultry eyes. They are all done in shades of brown and beige. I also included a picture of smokey eyes at the end. Same techniques, but in shades of grey and blue. 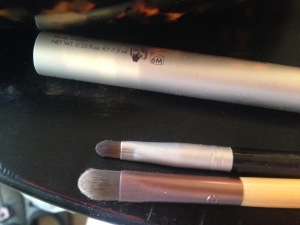 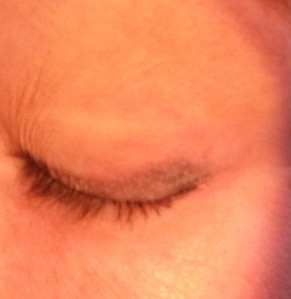 Smudge a line of dark gray along lash-line using just the tip of the thin brush; make it a little thicker toward outside edge. It doesn’t have to be perfect; you will blend later. Also smudge just a bit of gray to the outside third of the lower lash line.

Add matte beige over whole eyelid up to the brow bone using the wide brush, then blend well with the fat brush. 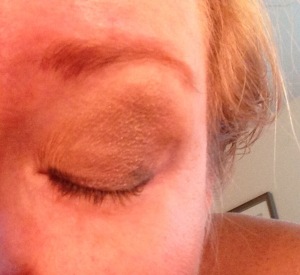 Add slightly shimmery darker brown in middle of eyelid up to brow bone, feathering toward outside corner of eyebrow 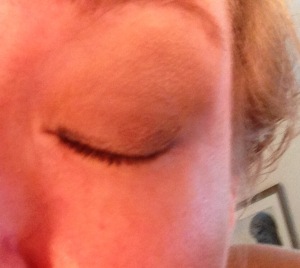 Add mascara, wiggling brush at the base of the lashes to separate. I like to add mascara just to the very outside lashes on the lower lash line. 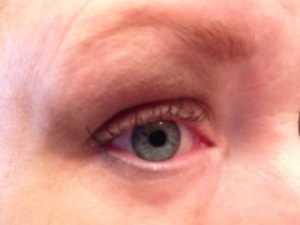 Note just a touch of smudged gray on outside corner of lower lid. I like to use it instead of eye liner, which is too heavy for me. 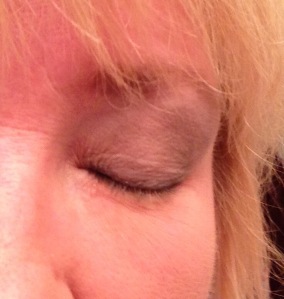 Smokey eyes. Looks like deep thoughts are running through my mind. That’s because I was thinking about the deep line running across the bridge of my nose. I want it gone, dammit!

HA! I remembered my third tip: for eye shadow along the brow bone, just below the eyebrow, use a flat brush and PAT it on, don’t brush. I don’t know why. The Sephora people told me to do it that way and I always do what I’m told.  I told you I had a third tip, and you doubted me. I may take away some privileges. Not sure. I’ll have to think about it and see if your behavior changes. So shape up.
*I appear to be feeling a little aggressive today and it looks like I’ve scolded you several times. I apologize. Maybe I’m a little nervous because this is my first tutorial and I’m afraid you’re being judge-y. So please don’t judge and forgive me for my attitude. And have a great day. And let me know if you try this out and if it works for you. And send pictures. And that’s all I have to say.
40.526316 -105.127259